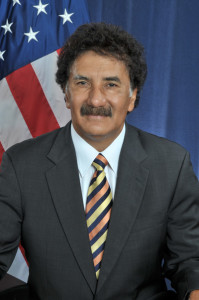 Newark, NJ — The Association of Bi-State Motor Carriers is proud to announce that Federal Maritime Commission Chairman Mario Cordero has been chosen to receive the 2016 Malcom McLean Award at the Association’s upcoming Golf Outing and Awards Luncheon, to be held on Tuesday August 2, 2016 at Forsgate Country Club in Monroe Township, NJ.   The award is dedicated in memory of Malcom McLean, the visionary who invented shipping containerization and revolutionized the international freight industry, and is the highest honor bestowed by the Bi-State at their Awards ceremony each year.

The Malcom McLean award is given in recognition of the personal contributions the recipient has made towards the advancement of the Intermodal Container Industry during the past year. “The Bi-State felt it important to recognize the great strides that have been made during Chairman Cordero’s tenure,” said Association President Jeffrey Bader, “particularly as it pertains to communication. As a direct result of Chairman Cordero’s efforts to be inclusive, encourage open dialogue on key issues affecting intermodal commerce, and put forth forward-thinking initiatives, we’ve seen progress and partnership grow amongst the stakeholders at the Port of New York & New Jersey.”

The Association of Bi-State Motor Carriers hosts its Golf Outing and Awards Luncheon annually in late Summer/early Fall. “This event offers a wonderful opportunity for us to gather together our Bi-State members,” said Bader, “along with representatives from our Pier Terminals, Shipping Companies, Equipment Providers, Port Authority officials, elected public servants, and of course, our honored guests and award recipients.”